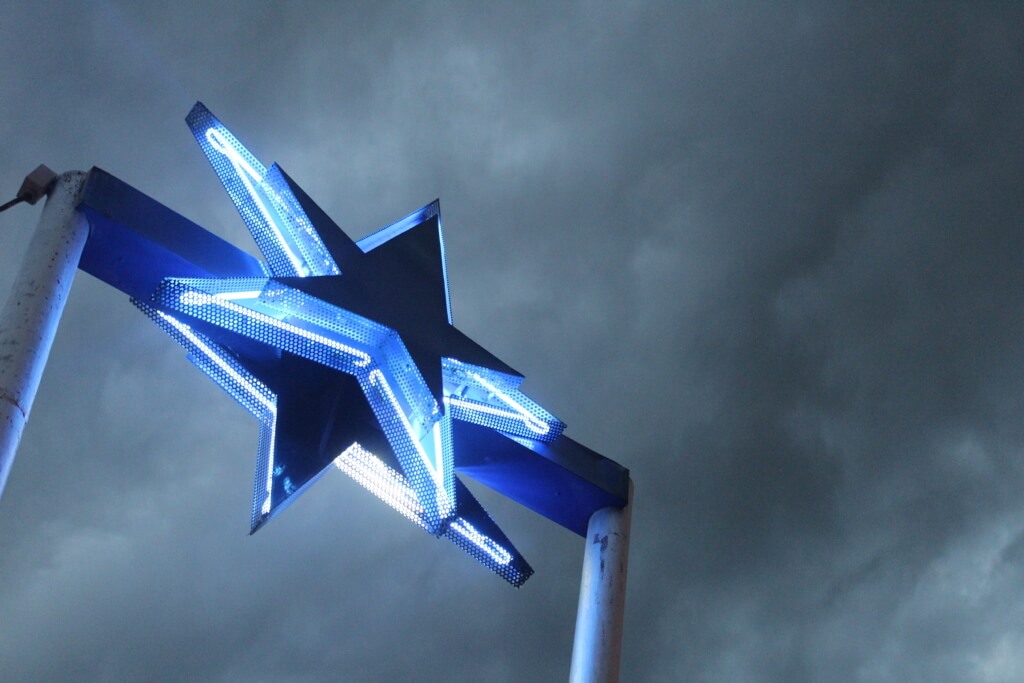 The Blue Star has consistently been hosting pairing dinners and with their intimate private dining space it proves to be an ideal venue for these exclusive events. As of November 2016, Brian Blasnek has taken on the role of executive chef and is offering a satisfying ping pong effect varying Blue Star’s focus between beer and wine. Local breweries, Triple S and Storybook Brewing, recently received some attention but on Thursday, June 8, the spotlight shifted back towards Blasnek’s home state with a Cali-centric wine dinner featuring Robert Biale Vineyards.

“There is a mutual admiration between Blue Star and Biale,” says Dave Pramuk, co-owner and co-founder of Biale Vineyards. “They’re one of the best, long-term supporters of our little winery.” 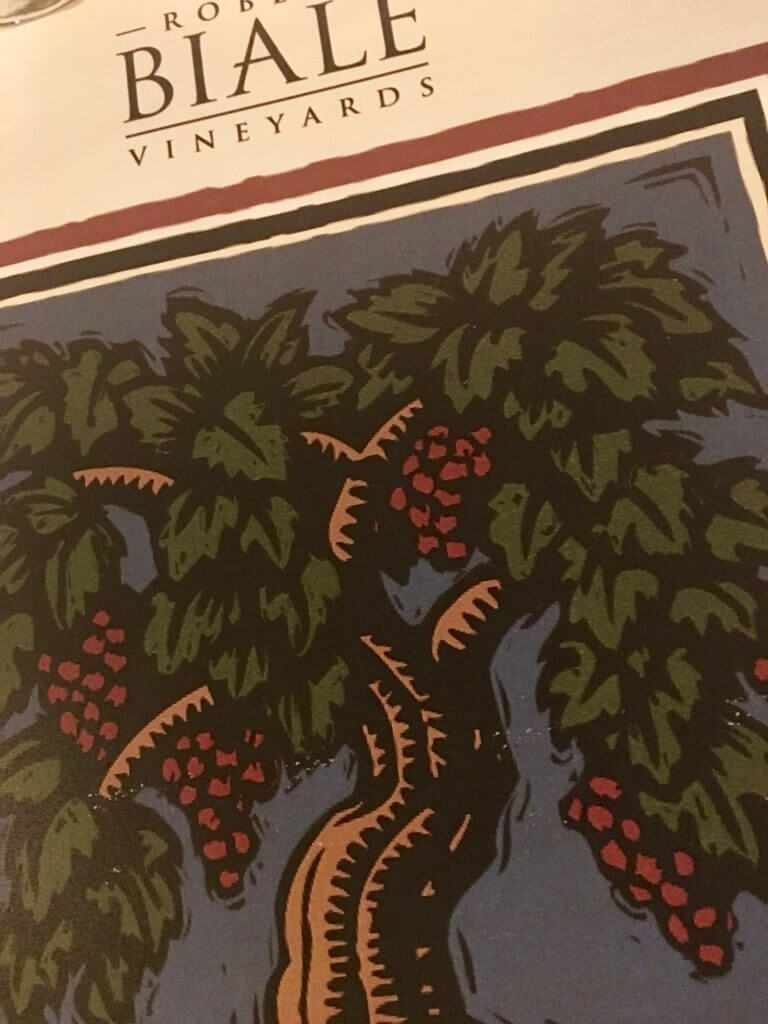 Biale is known as the “house of Zinfandels” with a portfolio of fifteen from Napa and Sonoma, California. They’re known as a top producer of the varietal by Robert Parker, Wine Spectator and Wine Enthusiast, also considered a benchmark wine by the Court of Master Sommeliers. In elite wine training, Biale’s Zinfandel is a reference point since it encompasses the flavor profile so masterfully.

“They do some amazing Zins that aren’t over-oaked, like a lot of Napa stuff is,” says Blasnek. “They have really nice notes. We picked one or two out and focused the food around those.”

We start off with a Rose Sangiovese, called Rosato, with subtle notes of honey, strawberries and vanilla with a crisp minerality. “Like milk or mayonnaise I call Rose a refrigerator staple,” says Pramuk. 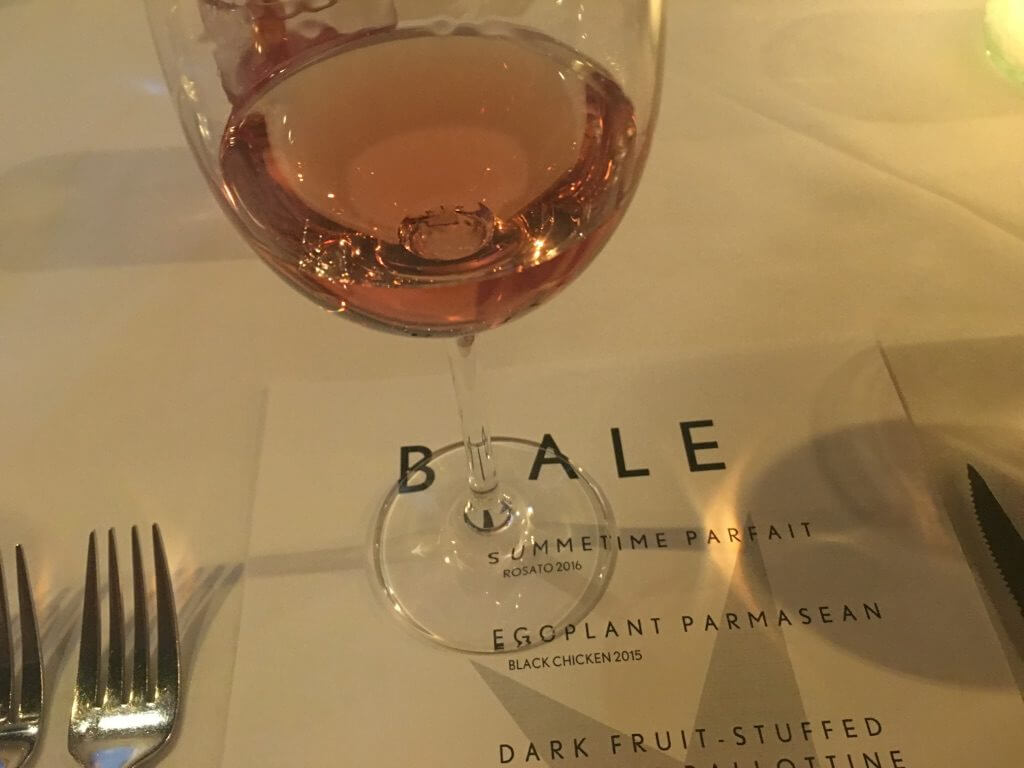 The first course is a summertime parfait with fresh strawberries, an apple, thyme and tarragon compote with orange blossom and honey sweetened yogurt.

“One of the most common questions we get is, ‘when do we drink Zinfandel and what do we have it with’,” says Pramuk. “Basically, drink it with people, drink it with anything.”

Black Chicken, Biale’s staple wine has a clever past that peaks our interest. In the 1940’s the original owner’s son, Aldo Biale, would use a code word when taking orders for jugs of his homemade Zin via a party line. Commercial sales of alcohol must meet governmental regulations and to mislead anyone that may be listening in Biale chose to call it “Gallo Negro”. The Italian translation means black rooster, which is also the folkloric symbol for Chianti. Over time it evolved into the moniker that stands today.

For the second course we get to try the elusive 2015 Black Chicken. An earthy, mushroom quality compliments the small plate of Japanese eggplant parmigiana topped with fried basil. The porous vegetable stack absorbs the light spice from the marinara and the blended Zin. 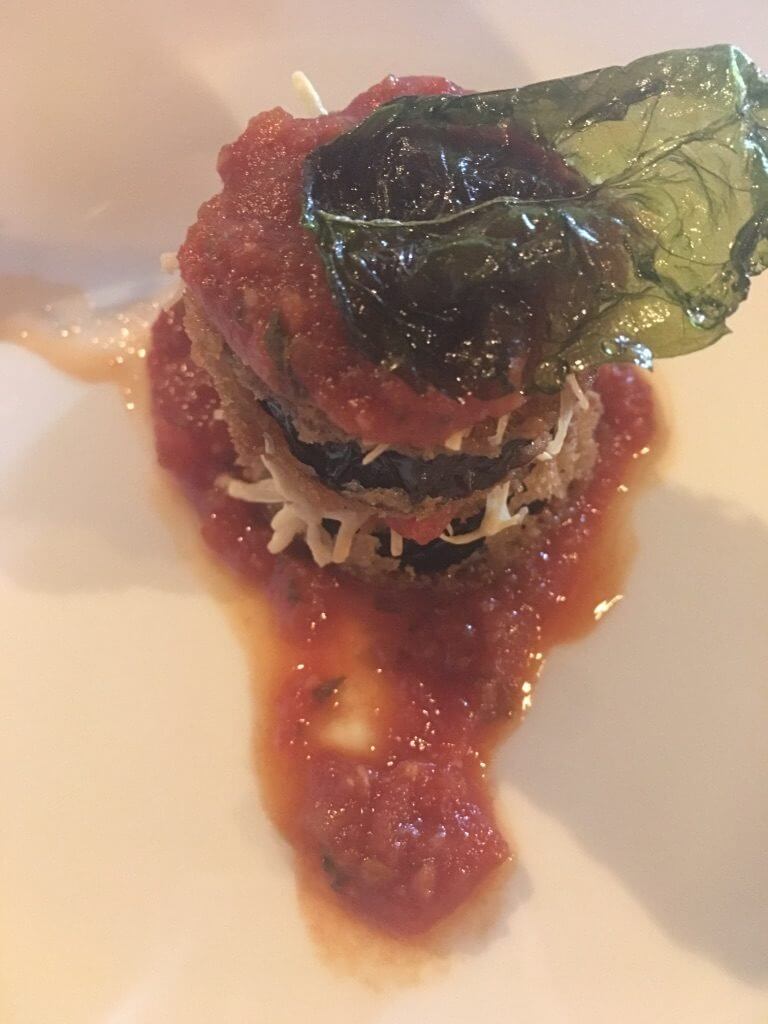 “The ’15 vintage can be characterized in two words, early and intense,” says Pramuk. “We had a light crop, small berries packed with flavor. There is so much expression, perfume and mouthwatering acidity. It’s a really juicy, delicious vintage.”

The third course starts with the Basic Black: Grenache, Petite Syrah, Syrah, Mourvedre and Zinfandel grapes all thrown into a fermenter together.

“Kind of like in the old days,” says Pramuk. “When you do that, you get a synergy of fruits, character, and tannins, shape and structure that you don’t get when you just blend finished wine.”

Only 500 cases of the 2012 were produced. It’s served with a dark fruit-stuffed chicken ballottine, fresh herb salad, dutchess potato topped with glace de viande. The sherry sauce, plus the jammy flavors from the cherries and the wine produce a distinct sweetness. 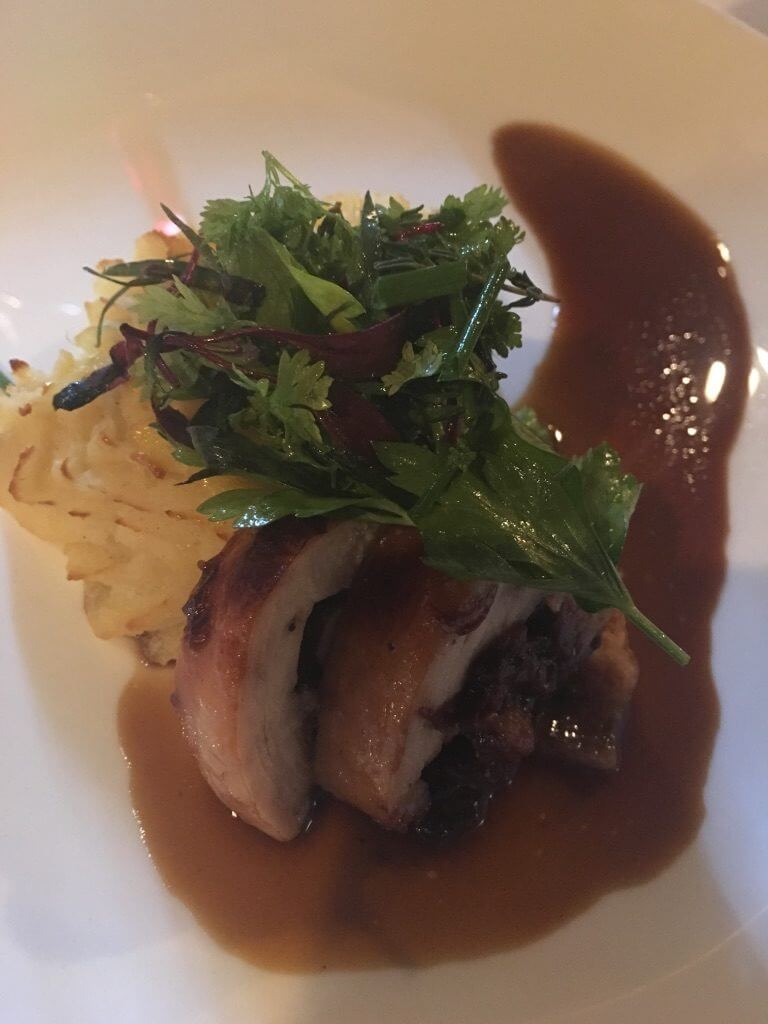 The fourth course is given praise throughout the remainder of the evening as spot on. A two-bone rack of lamb, peppercorn crusted with braised collard greens, stewed lentils and herbed lamb jus. It’s  accompanied by the 2015 R.W. Moore Coombsville, with grapes from one of the most historic vineyards in California, planted in 1905.

“It’s from a cool, little pocket of Napa,” says Pramuk. “It’s an ancient volcano, heavily influenced by really cool breezes and fog that comes in from San Francisco bay. Grapes ripen very slowly over a long time there. Dark colors, deep flavors. This wine has a creamy texture, kind of a seductive wine.”

Recently this wine received some publicity as it emerged as a favorite old-vine clone that University of California-Davis is recommending to plant new vineyards and to propogate the best genetics.

“I’m getting a lot of dark chocolate with back spice,” says Sanjay Kanchanlal, owner of Broadmoor Wine and Spirits. “Chef did a great job of pairing this one. On the money. This is when wine meets food and they both are dancing together.” 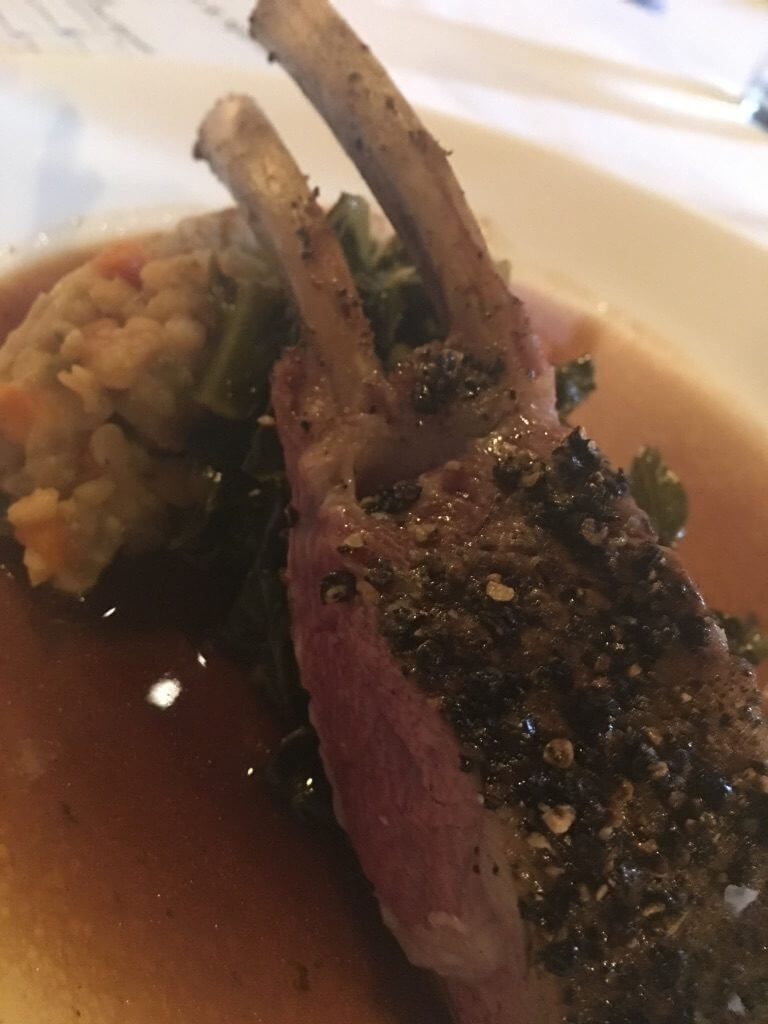 The last moments bring a savory Gorgonzola cheesecake with pickled cherries. “It kind of crosses the line between a cheese course and dessert,” says Blasnek.

The smooth, creamy crossover offers the best of both worlds. Pours of the 2014 Royal Punisher, a Rutherford, Petite Syrah, can accredit an anagram program for its mischievous name.

“If you’re into aging wine, this is the one,” says Pramuk.

This particular dinner has been set in motion since Anna Kress, sommelier at The Blue Star, started working there. Kress has a distribution background with a deep appreciation for Biale’s Zin reportoire.

“She has been planning this dinner since the day she was hired,” says Blasnek.

“It’s elegant,” says Kress. “It was the first time I’ve tasted a Zin that’s not sticky sweet. The wine really sells itself.”

Kress shares one of her, as she calls them, “ratatouille moments” when she came home late from work, and savored a perfect peanut butter and jelly sandwich with a glass of Biale Zin. “It was magical,” recounts Kress. We can totally get behind the approachable nature of that experience.

With a passion to stoke the fire within The Blue Star’s wine program, Kress continues to fill a niche in Colorado Springs for oenophiles and hopes to give the staff a collaborative way to approach pairings.

“Because it’s so subjective, we’re not wrong, we’re not right, but we can actually elevate the wine knowledge here,” says Kress. “All my arrows point to Denver but I think Colorado Springs has more of a challenge for me. I love the idea of being able to teach the servers and chefs profile and to keep tasting and compare together. I think that’s what Blue Star does well, they give me the freedom to buy, sell, and somme the wine, teach the class and we just keep going.” 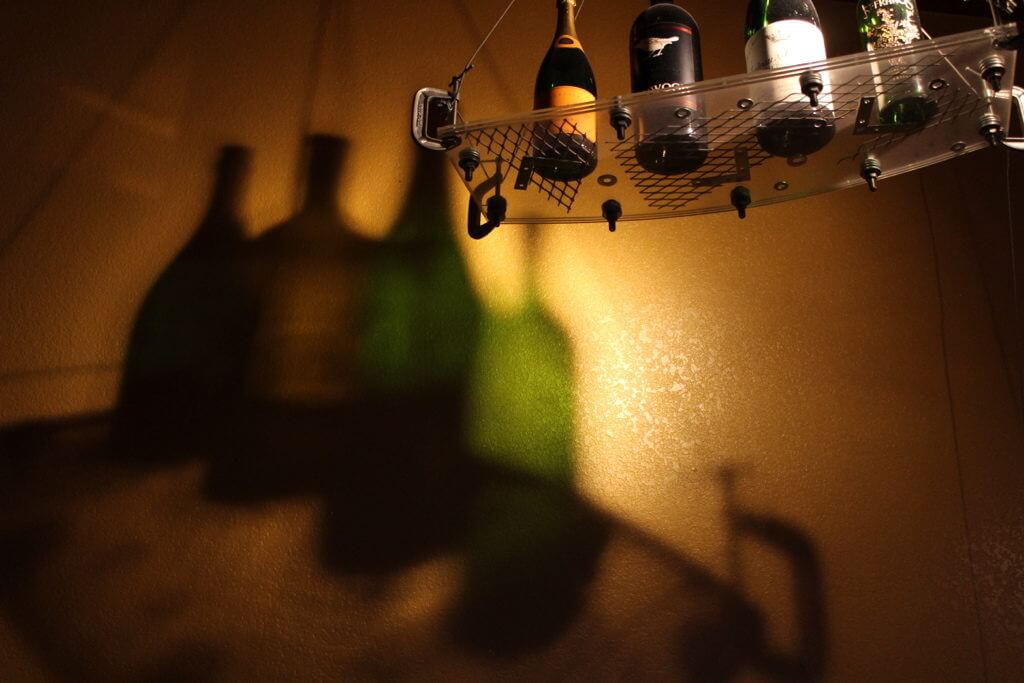 On Wednesday, July 19, The Blue Star will continue to share the seasonality and diversity of wine with the Rose Social at Ivywild School from 5:00 to 8:00 p.m. Tickets will be available soon for $25 with proceeds to benefit the Palmer Land Trust. Expect 25+ blush wines from eight different vendors on the patio paired with small bites.

“The versatility of Rose is so vast,” says Kress. “We just want to elevate, educate and have fun with it.” 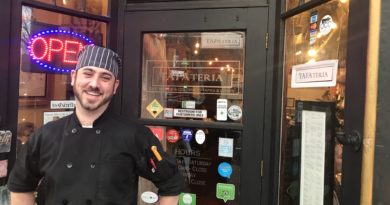 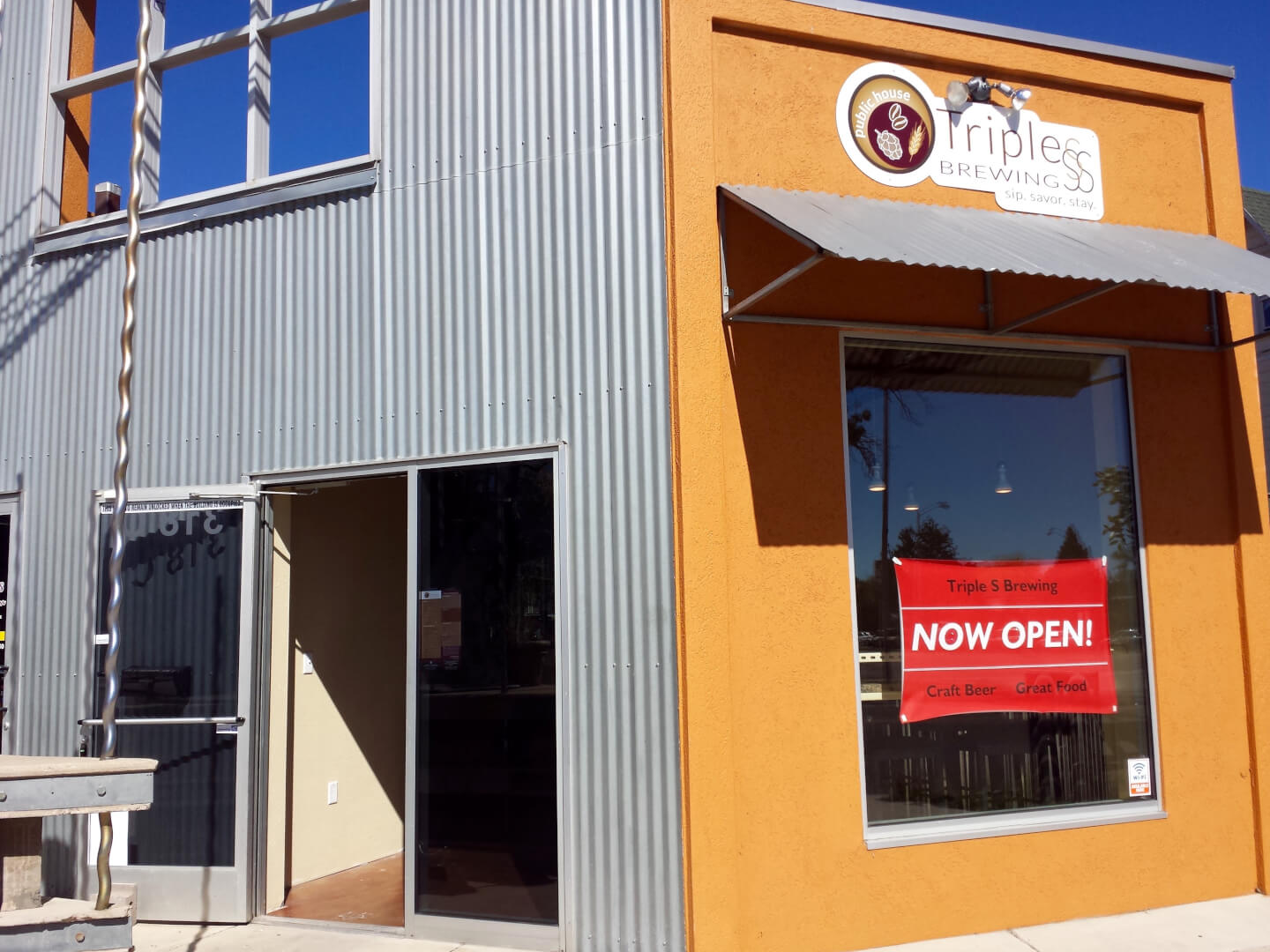 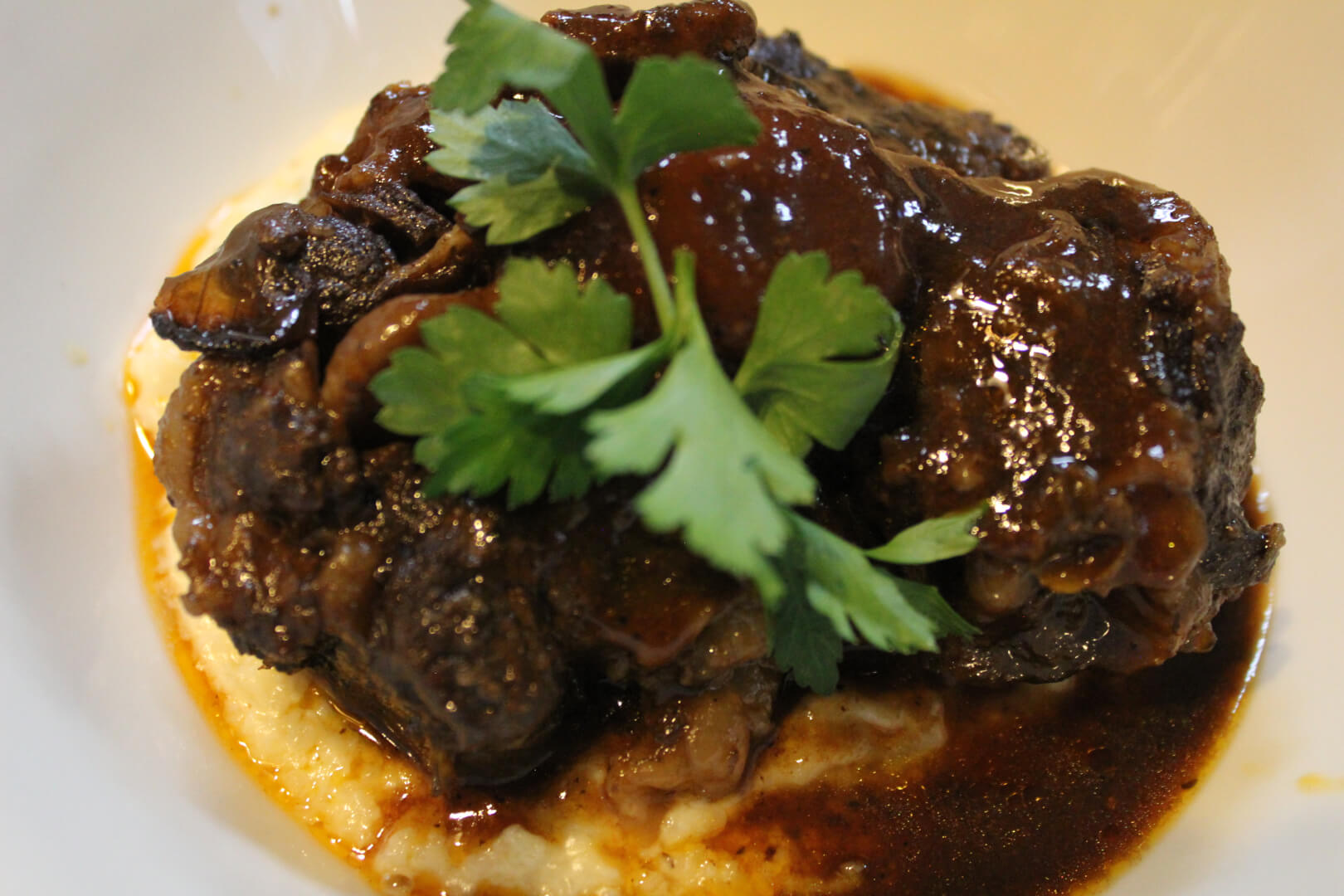 Recap: Taste the history at Margarita at Pine Creek

November 17, 2016 Dionne Roberts Comments Off on Recap: Taste the history at Margarita at Pine Creek