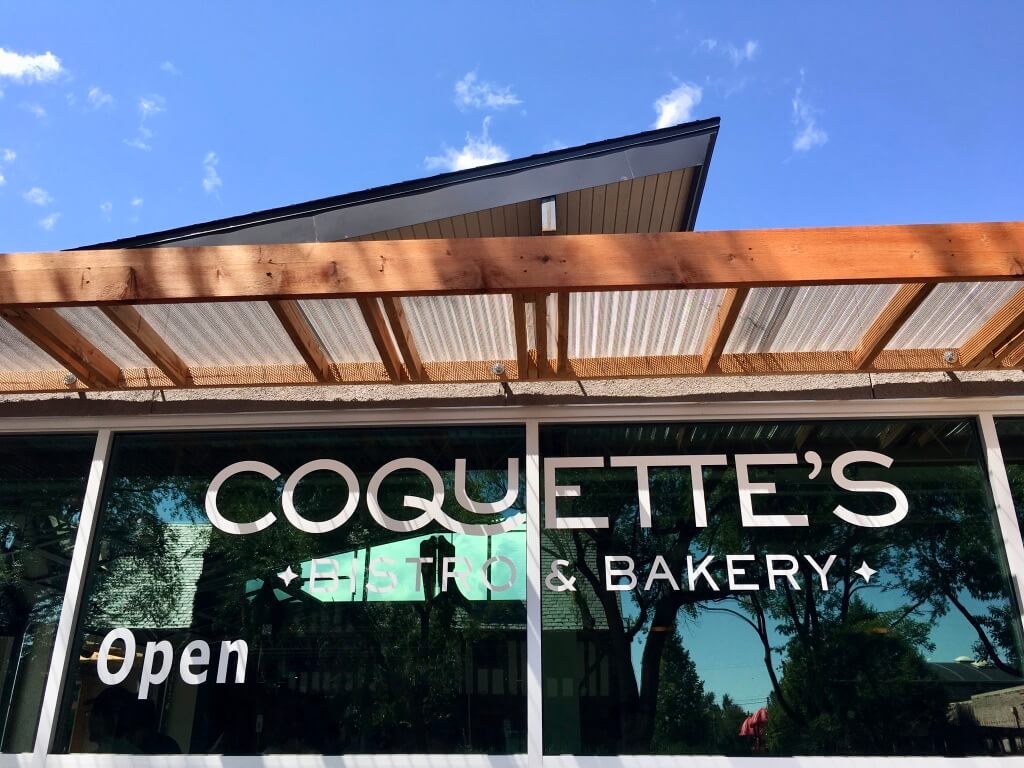 Mother and daughter duo, Michelle and Turu Marx, co-owners of Coquette’s Bistro & Bakery, have been on a path to bring accessibility to gluten-free dining since opening the first location eight years ago in Manitou Springs, Colorado. The decision to specialize spurs from Michelle’s own profound results from the dietary changes she implemented after suffering from unexplainable health issues. Turu was residing in London, pursuing a music career but heard the call to revisit their familial dream to open a restaurant together. Following Turu’s time abroad she found the crepe concept to be an approachable way to bring in the gluten-free angle.

“It was a risk,” says Turu Marx. “It was just being kind of talked about and people barely had options at that point. I don’t think we understood what was about to happen with so much of the population going gluten-free.”

Since then they have sold their proprietary flour blend to Whole Foods Market for a five year distribution stint, opened a location downtown on N Tejon St. and at the end of July saw the completion of their ideal venue at 616 S Tejon St. 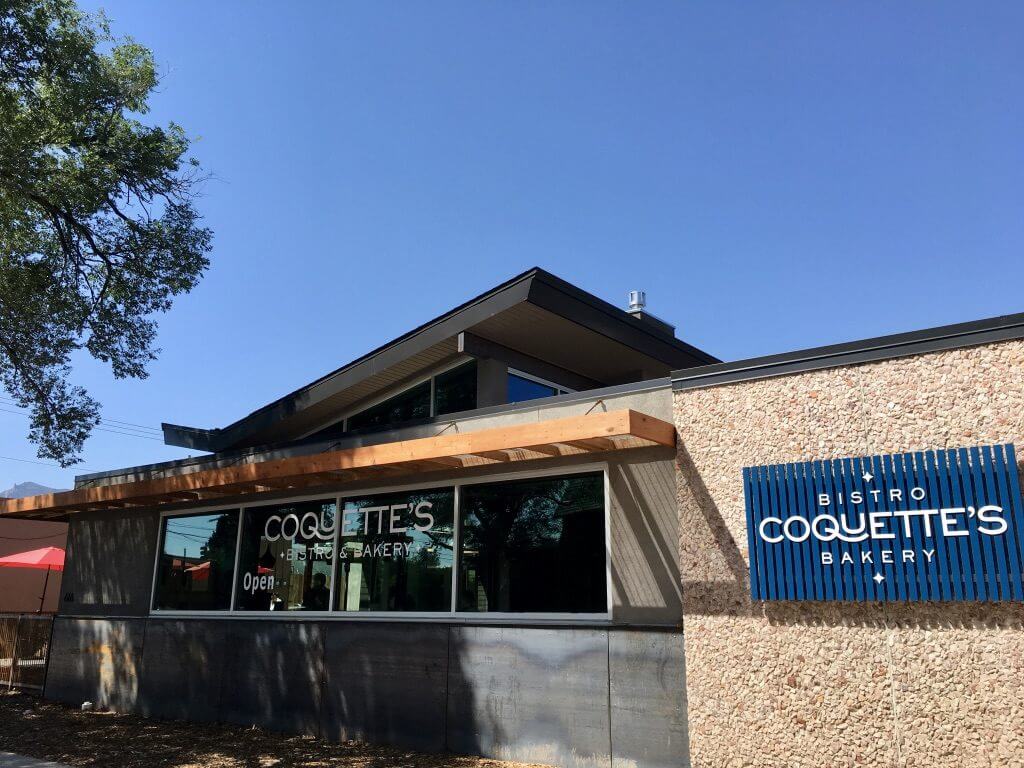 “It’s everything that was in our hearts and minds,” says Michelle Marx. “We have created what I feel is an incredible space for emotional enjoyment and dining and lounge pleasure. We can sit in any spot in the building and say ‘this is cool.'”

“It’s just a dream,” says Turu Marx. “We started fantasizing about what our perfect location would be and through the years knowing what our customers wanted and being able to give that to them.”

Aside from dozens of customized menu options that adhere to gluten-free standards, Michelle and Turu want to offer their patrons an experience complete with an additional event area to host private gatherings. A large room off the main dining area fills that niche with the ability to accommodate approximately 40 guests.

“We had a wedding reception, baby shower, a couple of companies that just wanted to do something nice for their employees, it runs the gamut,” says Turu Marx. “Now we are just so much more appealing to the general public because the space is so amazing. Then that draws people in to try what we do if they have any hesitations because of the gluten-free aspect. Then they come here and they fall in love.”

The room will rotate through artists “to keep a fresh feel,” says Michelle Marx, and for the moment it overflows with the abstract works of Denver-based artist, Carol Kozlowski.

The menu itself is vast, with numerous dishes that would never register to patrons as gluten-free. Their crepes are still a staple but the pot pies and fried chicken prove to be exceedingly popular. A long list of burgers and sandwiches plus the new addition of pizzas come as a pleasant surprise when there’s an expectation to go without a crumb of bread. We got to taste the filling Monte Cristo and delectable bananas Foster crepe, which certainly feels like a deviation from traditional gluten-free cuisine.

“People veer towards things that they just couldn’t have at all for years,” says Turu Marx. “So it’s just that kind of comfort food that people crave.” 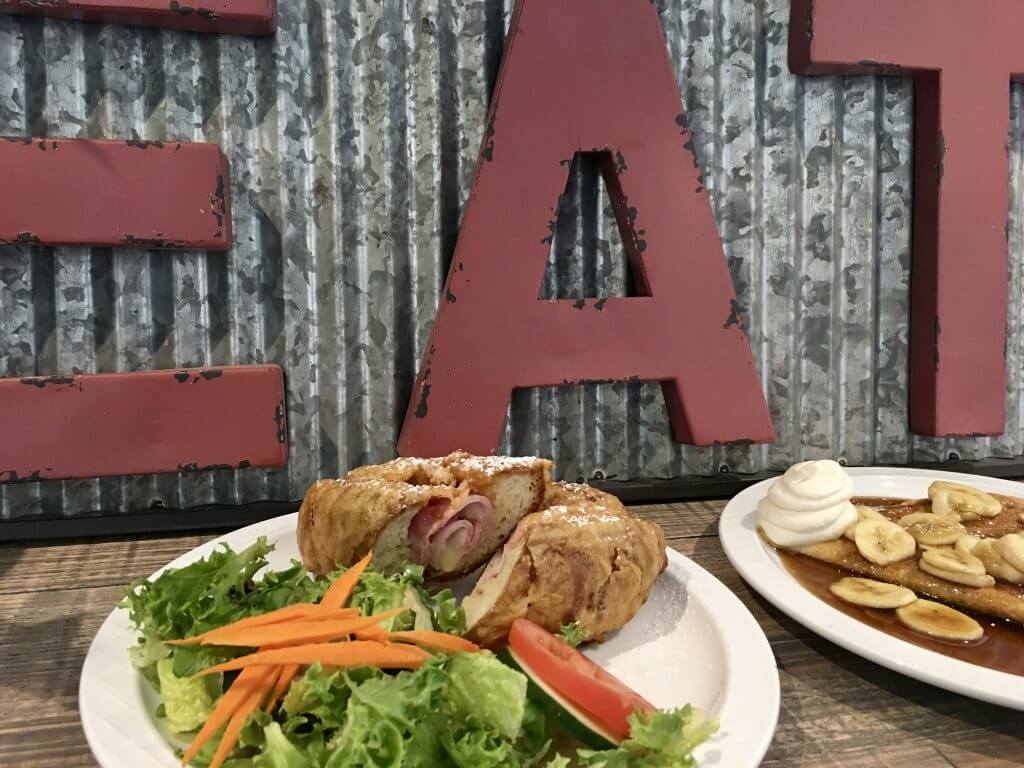 To accommodate other dietary restrictions Coquette’s includes paleo dishes and more vegan and vegetarian options. Plans to further the bar and lounge vibes will press forward as they continue to grow the wine list and revamp the drink menu with more craft cocktails. The only sources of gluten can be found in a few alcohols and some cans and draft beer.  The taps will become entirely gluten-free in the near future to feature nearby, Fieldhouse Brewing Co.

“We normalize anything that feels abnormal on a culinary front,” says Michelle Marx. “We’re always growing and moving towards the best for us and for our customers. 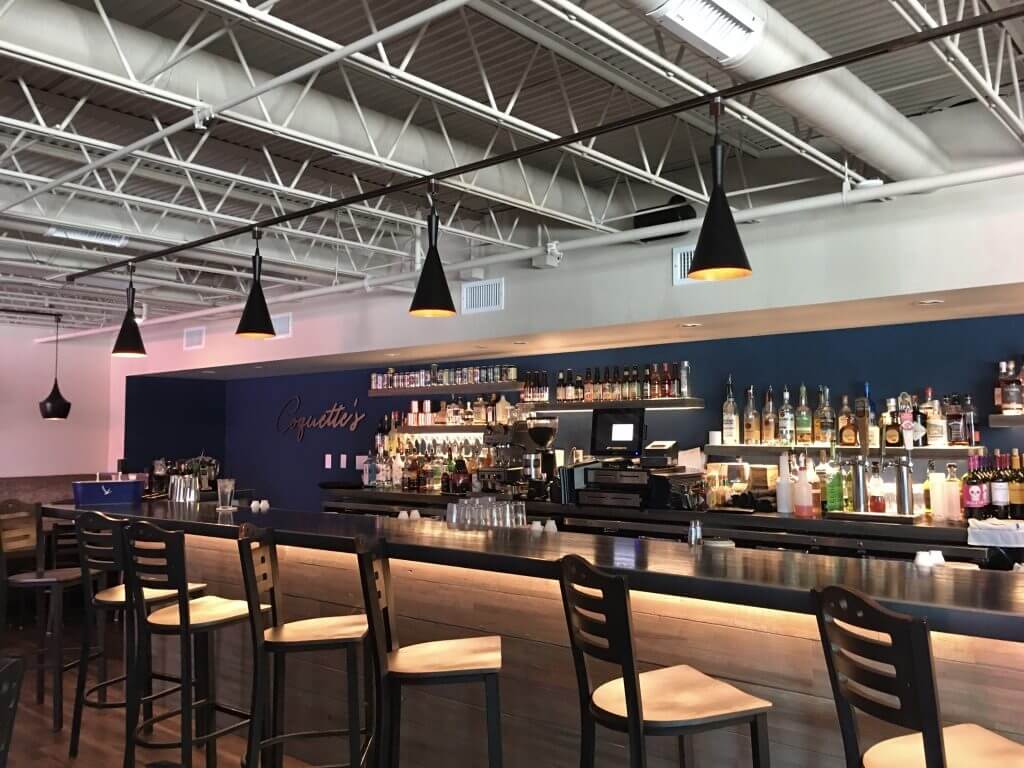 The once dilapidated, window-less building was purchased in July 2016, and with visionary touches from Michelle Marx the space has new life.

“I don’t know how many people looked at this building and she saw something that nobody saw, and she was right,” says Turu Marx. “She was able to see this space for what it could be.”

The building is modern and welcoming from the outside and hosts a gorgeous, sleek interior with tons of light that streams in from the many well-placed windows. A multi-textural fireplace stands in the center of the restaurant, made of stone, wood panels and metallic accents that reach toward the ceiling. It also serves as a divider between the bar and main dining room. Two industrial garage doors create an open air space that leads out onto the patio. 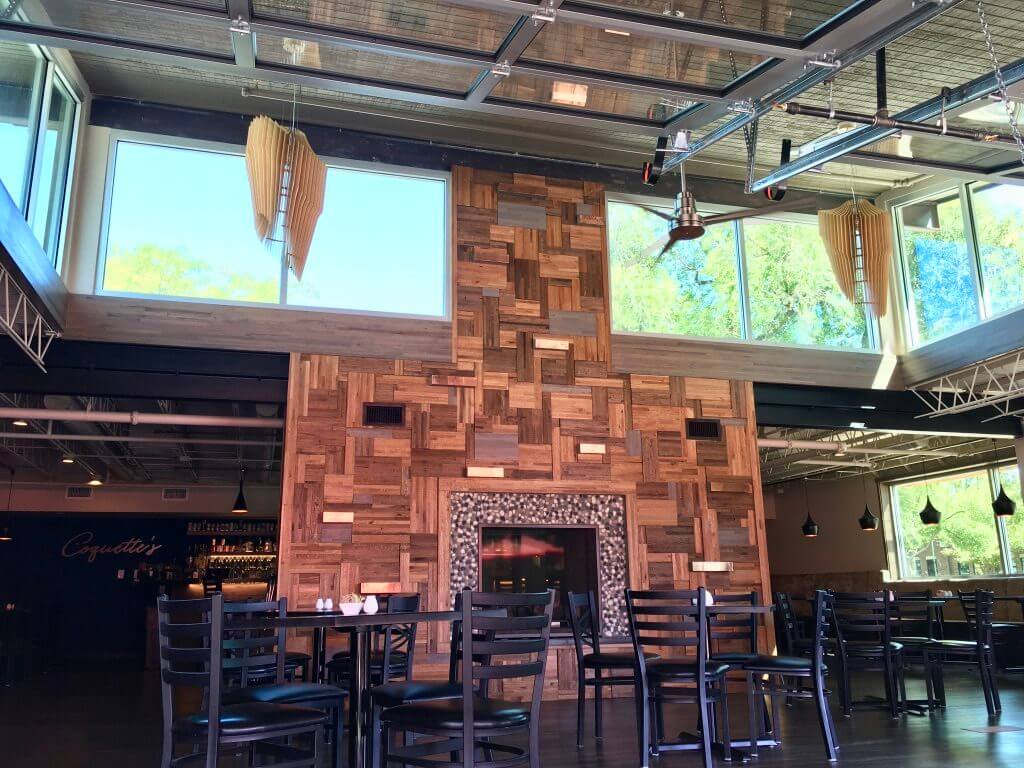 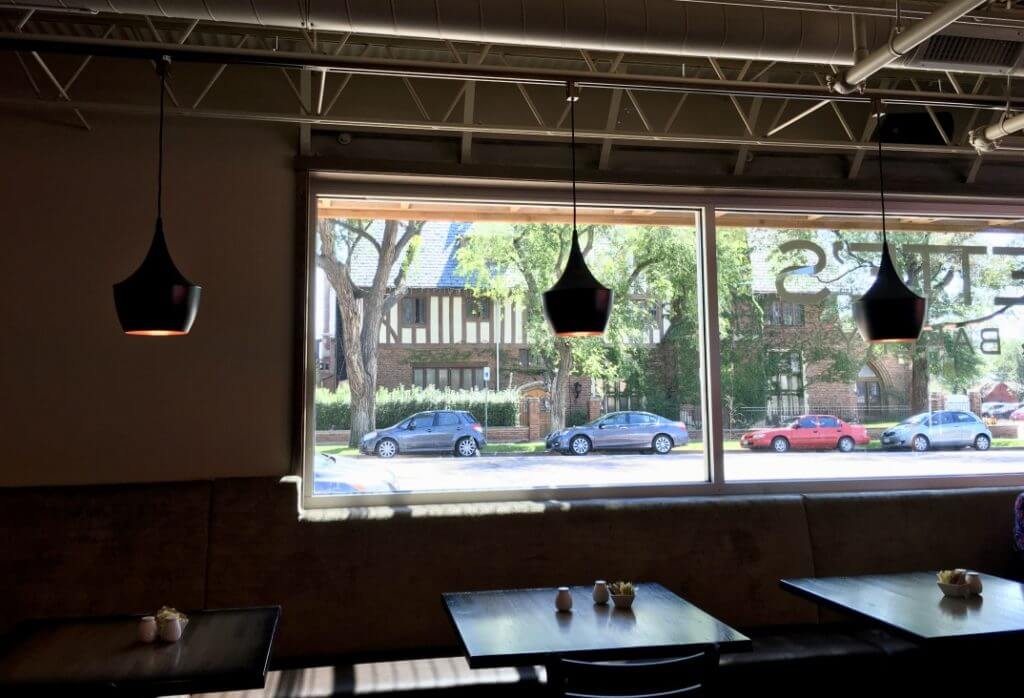 “I have an interior decorating gene that I’ve never been able to express and this building has given me a canvas that I’m totally thrilled about,” says Michelle Marx. “It totally came together and I’m extremely proud that I get to put my stamp on something that will last for an extremely long time.” 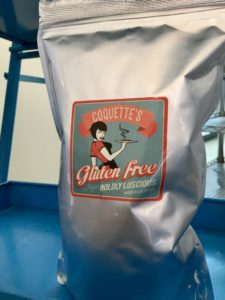 The bakery is it’s own connected entity which opens Tuesday through Sunday at 8:00 a.m. The glass cases are brimming with giant cupcakes, quiche, cookies and breakfast pastries. It also serves as the on site retail area to purchase frozen goods and Coquette’s signature rice flour blend. Available in two pound bags, it consists of xantham gum, potato starch and arrowroot powder, and is at the base of all of their menu items.

“It’s very simple,” says Turu Marx. “The ratios are where the secret comes in. We just hit on a magic concoction that was just better than anything out there.”

Coquette’s is currently closed on Mondays and begins service in the cafe on Tuesday, Wednesday and Thursday at 11:00 a.m. Friday through Sunday the entire restaurant opens at 8:00 a.m. to serve brunch and closes at 10:00 p.m. daily.

“We don’t just provide a meal,” says Turu Marx. “We wanted to take it further. We didn’t want people with restrictions to feel like they’re just being handed a salad. Having to live that way is really unpleasant because food is fun, right?” 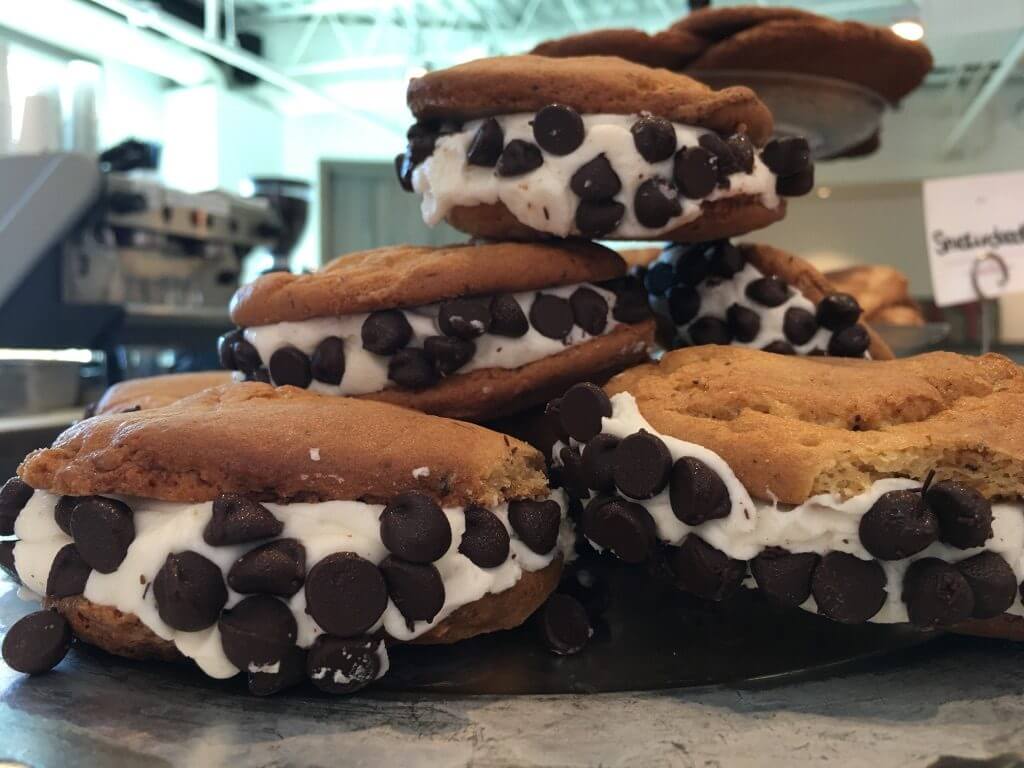 Coquette’s continues to contribute to the downtown resurgence but brings a speciality into the fold that appeals to all diners.

“We’re elevating what we were already doing without taking away it’s sass and it’s true nature,” says Turu Marx. “The way we created it was to be a cool experience, a good energy place. Music, entertainment, food, connections.” 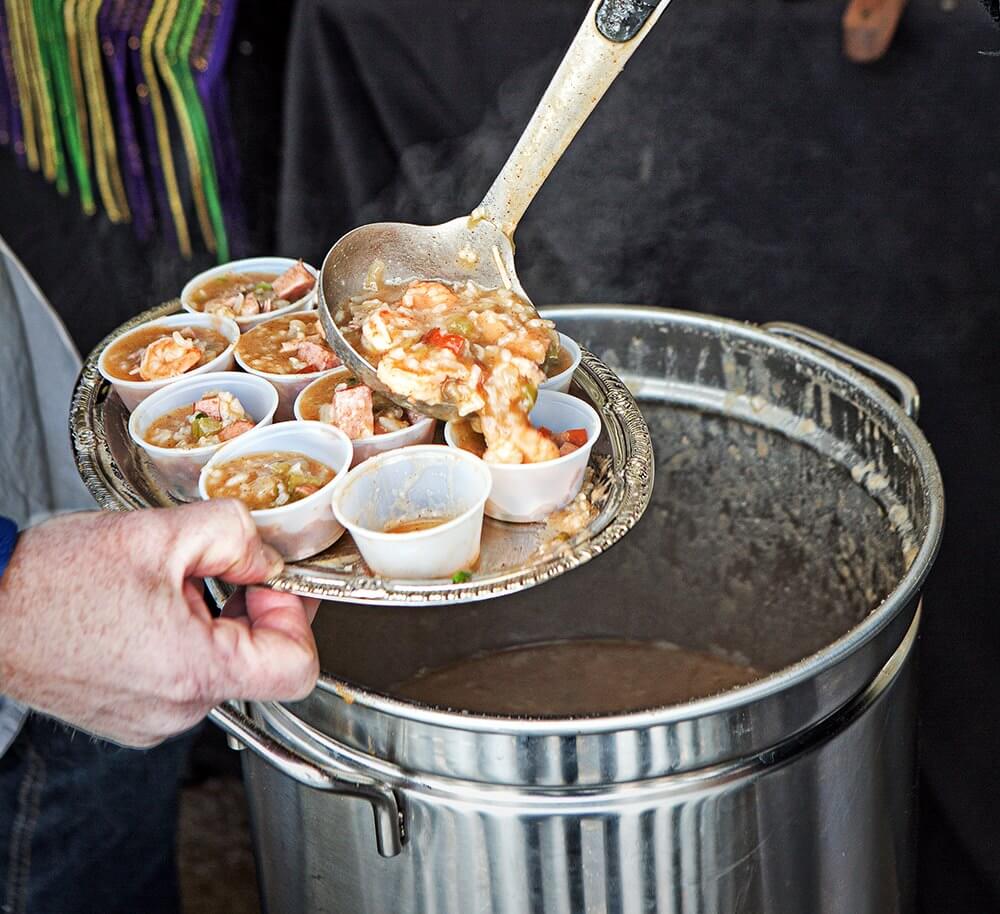