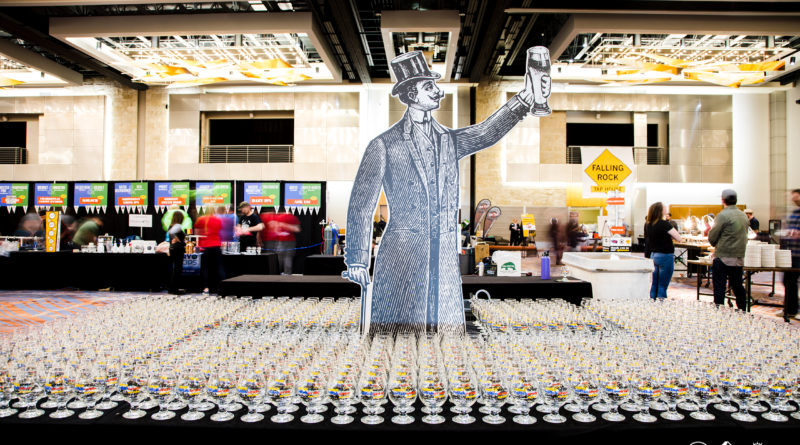 On Saturday, March 31, Two Parts in cohesion with the Colorado Brewers Guild welcomes the fifth annual Collaboration Festival, held for the first time at The Hyatt Regency in downtown Denver. RMFR attends the event and tastes an impressive lineup of “bad-ass” brainstorming beers but what’s more noteworthy is that the brewers themselves are the ones passing out pours and appear to be having a damn fine time doing so.

RMFR catches up with Steve Kurowski, operations director at the Colorado’s Brewer’s Guild, and Tobias Krause, senior events manager at Two Parts, who plays an integral role in planning craft events in Colorado. We appropriately chat on Wednesday, April 4, Colorado Pint Day, to discuss our favorite collaborations and why this particular festival yields one of the most exclusive and creative opportunities to celebrate the people behind the beer.

“Five years ago we got our hands on Colorado craft beer week (2013) and the second year we really felt that [it] needed a feature event,” says Kurowski. “We got a bunch of brewers together in a room and organically this idea came up.”

Kurowski and Krause admit that they didn’t anticipate very much enthusiasm the first year but a promising 120 breweries and 50 beers christened the inaugural event.

“It was way more popular than we ever imagined,” says Kurowski. “We didn’t think brewers would spend that much effort making one beer for one festival. So we were pleasantly surprised and since then it’s just taken off.”

This year’s event consists of 200 breweries offering 130 beers (not including variations, ex. barrel-aged) with 3,000 patrons, brewers, media and volunteers in attendance.

Over a dozen Colorado press outlets were able to join Wibby Brewing to contribute to the media collaboration beer, “Throwing Stones Steinbeer.” Hot rocks heated in an aspen fire are added to the mash to encourage smoky flavors followed by a piece of granite tossed into the wort to intensify the boil. This spurs a caramelization process that results in a niche style that’s entirely new to our taste buds.

“People who cover the beer beats in their community came and that was a really amazing experience,” says Kurowski. “They get to catch up and socialize with each other and then they get to learn a little bit about the process of brewing.”

The synergy of Collaboration Festival also combines “declaration projects” which invites a group of breweries from a certain area to join forces. Summit County delivers with a plethora of veteran and newbies from surrounding ski resort towns to share “Gin-U-Wine.” A wheat wine, similar to a barleywine in strength but American strong ale in flavors, finishes with the essence of gin botanicals from Breckenridge Distillery. 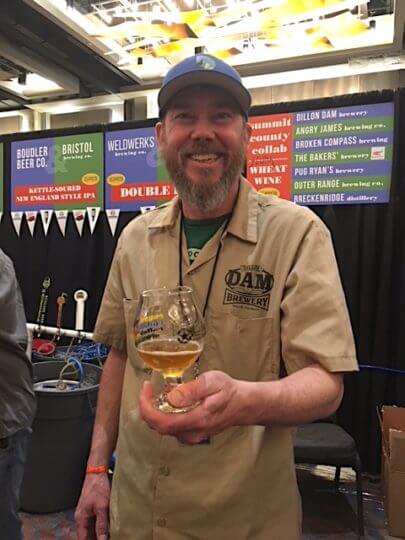 Molly’s Spirits, a sponsor of the fest, works with New Image Brewing “like two breweries coming together,” says Krause, to make “I Can’t Believe It’s Actually Butter” a strong coconut, vanilla and chocolate pastry stout that replicates a Samoa cookie in a glass and legitimately folds the golden spread into the mix.

Funkwerks, primarily known for their Belgians and saisons, blends with 21st Amendant Brewery to create their first ever IPA with nods to the both coasts and appropriately names the beer “Fraud Complex.” 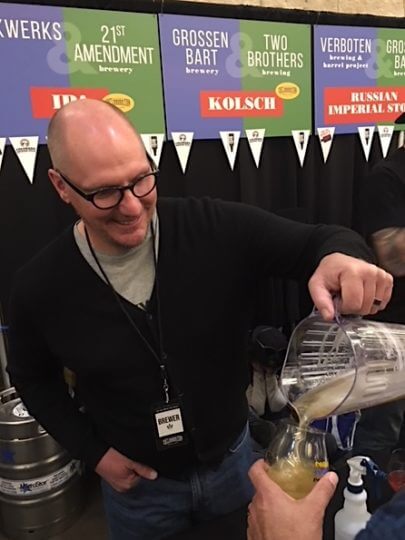 The Colorado Springs crew includes Cerberus Brewing Co., Goat Patch Brewing Co. and Fossil Craft Beer Co. whose edition wins us over with “The Big Cactus”  which contains New Mexico agave and hand-picked grapefruits from a family property in Arizona. 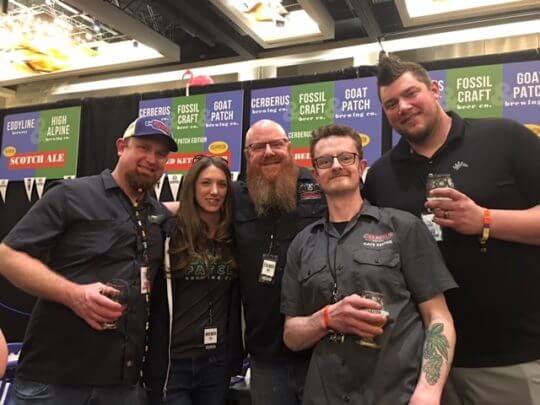 The beer/mocktail and slightly blonde sour “Pimms Yo!” from Liquid Mechanics Brewing Co. and Wiley Roots Brewing Co. is an attractive and easy-drinking representation of the popular, light British beverage. 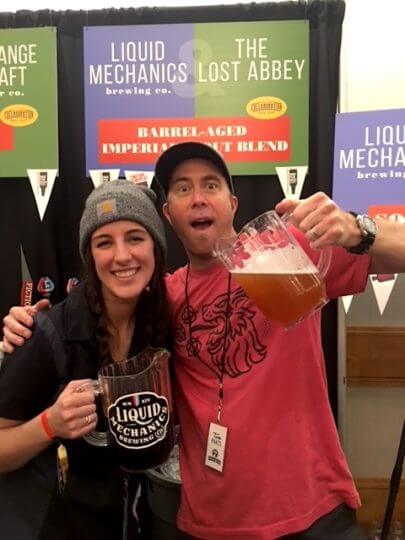 Moonlight Pizza and Brewpub and CAUTION: Brewing Co. dunks Peking ducks into “What the Duck Five Spice Gose” to create a savory and herbal beer with the fragrances of fennel, peppercorn, clove, star anise and cinnamon. Inventive and a touch crazy, we dig it.

Joyride Brewing Co. and Snowy Mountain Brewery from Wyoming, “Take it Easy” with a fruited hazy brett IPA that celebrates Colorado and our neighbors to the North, using malts from both states, dense oats and layers of tropical and fuzzy fruit. 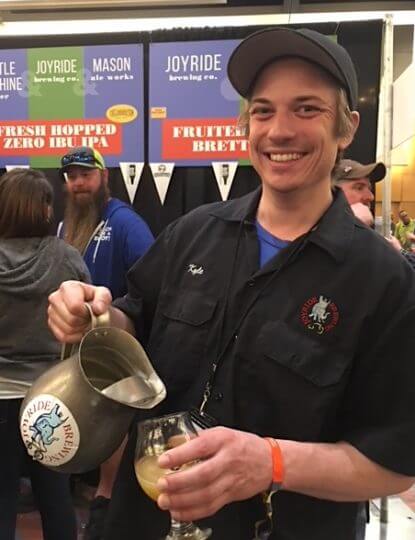 This year’s host location serves as an answer to the congested flow and limited capacity from the years past and Krause says that it was a priority and “goal of ours to make this festival accessible.” The hotel ballroom at The Hyatt serves as an ideal open space to and a wise choice to ensure pleasant experiences for the patrons and especially the brewers.

“We are thinking of them first and want to make the process as easy as possible,” says Krause. “From the beer delivery to the pre-parties to the event wrap-up. We want to place the least amount of stress possible on them because that’s the focus.”

We can’t help but notice that happy faces abound during the festival and not just from tipsy ticket-holders. The brewers take the time to chat with us thoroughly about their beer, naturally with the upmost knowledge, and they’re out on the floor as well socializing, tasting and laughing.

“It’s not the promo teams that go to this festival,” says Kurowski. “These are the brewers and the owners of the breweries so it’s a really unique atmosphere. This is for me feels like a big class reunion every year.”

We also acknowledge the food choices available during Collabfest compared to other typically expensive and sub par concessions so many festivals are tied to. The new venue provides complimentary snacks to cleanse the palate between tastes, free samples of Colorado-made products and options for those with dietary restrictions.

“The food is something we want to try and continue to improve upon,” says Krause. “That was a nice part of having the fest at the Hyatt because they were very excited to craft a food menu and have enough options for everybody.”

Collaboration Festival carves out a distinguished spot as an affair that’s like no other “not just in Colorado but nationwide,” says Kurowski. Similarly to the way guests feel as an executive chef approaches the table to confer with them about the quality of the meal there’s an emotional response and formidable respect we take away from our time there. The ability to interact with the brewers and owners and to see them do the same, cultivates a higher appreciation and support for the industry and the individuals that make these nuanced beers come to fruition.

“It was a really positive experience and I think we all left thinking it was a really fun party and event,” says Krause. “It was a good foundation to build from and you saw so many brewers smiling. We took all the neccesary steps to make sure it was as good as it could be.” 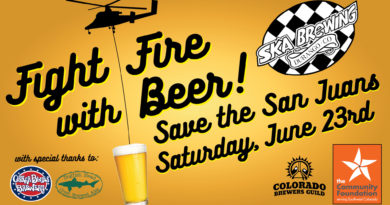 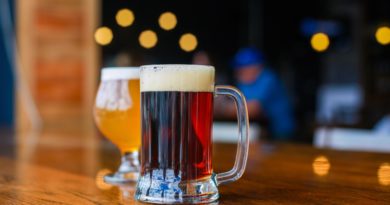 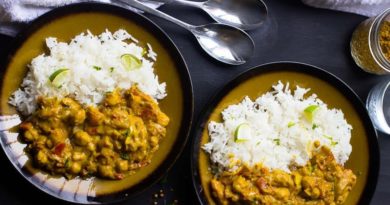