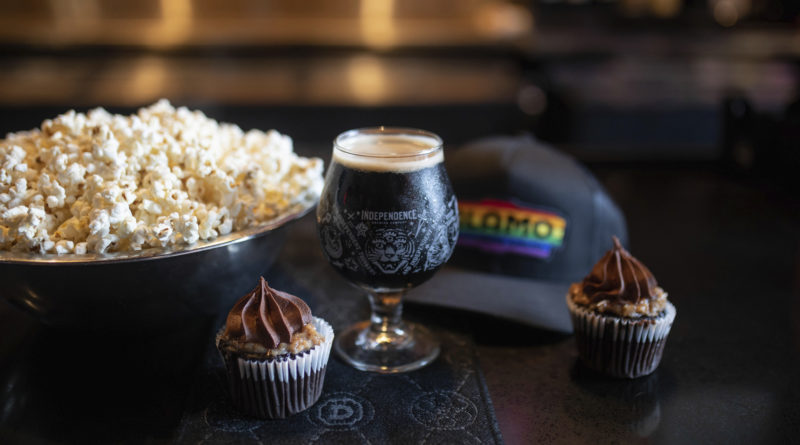 Texans sure do love them some Colorado, and who can really blame them? We seem to share some common ground with our Southwestern compadres; a well-known appreciation for the great outdoors, a slower pace than our coastal counterparts and a strong propensity to drive unnecessarily in the left lane. Being a Texas transplant myself (shhh…don’t tell anyone about our predilections for big hair, field parties and saying y’all) we are very familiar with Alamo Drafthouse, the original movie theaters with craft food and beverages services that we would frequent in our college days, long before the clever concept began to catch on nationwide.

Now with two Denver locations, Alamo Drafthouse is another shared component of our two states and we can add one more to the list as Independence Brewing Company, based out of Austin, unveils “End Credits” a holiday edition beer as of Wednesday, December 5. The integration of this festive tradition in Colorado theaters marks the first-ever Independence brew available in Denver, and the company’s official introduction to sales in the Centennial State.

“This evolving series of limited-release holiday beers from Independence has become an annual end of year cinematic tradition for Alamo Drafthouse,” says John Gross, Alamo Drafthouse director of national beer promotions. “We think highly of everything the brewery puts out and savor every drop of the limited releases while we can.”

“The malt bill and addition of lactose gave the brew a touch of sugariness, which balanced out the mild bitterness of cocoa and hops,” says Radicke.

“End Credits” warrants a medium body with an ABV of 6.5-percent that Radicke confirms is “more cakelike than syrupy.” An appropriate mouthfeel for a beer built to emulate such a decadent dessert.

“We deconstructed the traditional German chocolate cake and brewed this chocolate-y, coconut-y cake stout,” says Radicke. “The base style is an oatmeal milk stout layered with velvety chocolate notes and accentuated by cocoa nibs from Ghana and Ecuador. We also used a Dutch-processed cocoa powder and a blend of chocolate malts to get the exact flavor profile we wanted.”

Gross and other Alamo team members were in attendance at Independence Brewing Co. to help create the specialty beer and collectively hand-toast 300 pounds of raw coconut on a flat top griddle for five hours over the course of five days.

“The delicious German chocolate and the subtle coconut somehow just taste even better when the lights are down in the movie theater,” says Gross.

A sweetly crafted accompaniment to a bowl of salty, buttery popcorn.

The seasonal brew is additionally on draft in select restaurants and bars in both states and makes Colorado the third state where Independence Brewing Co. distributes.

“Alamo Drafthouse is proud to treat our guests to a special, rich beer as a reward for making it through a gonzo year,” says Gross. “We drank plenty of standout beers while watching stellar movies in 2018 and are pleased to wind down with a chocolatey doozy as the proverbial credits roll on another calendar year.”

Radicke breaks down 2018’s “End Credits” in this one-minute video. Check it.